So yesterday, er, well two days ago now as I spent forever looking for my sketchbook. I didn't find it, either :( I found different ones, but there was on particular one...Oops. I didn't finish that first thought. So, whenever it was, the 19th, I crashed and burned. I had vertigo like I've never had and the only way I can think to explain is, the world was constantly tilting on its axis anytime I moved my head. As the day wore on, I was able to lift my body up without the spins so I didn't have to literally be lying flat on my back, but intitially, I could not even turn over from side to back without my head feeling like it was in a tilt-a-whirl at the fair.

At one point, I got up for an hour because I had to cook for my kids. It wasn't a pretty site. I made homemade hamburger soup, and in the process learned that Russian roulette when cutting potatoes is not a good game for my thumb. In other words, I was seeing in multiples because of the dizzyness and I guess wrong as to which thumb was the real one. Not fun. did not feel too good either. I was not walking so well and it could have been used as a comedy routine for the very drunk, I'm sure.

That hour is the only time I was up except to use the restroom. It was very disconcerting and I've not been in bed like that for years. Not since my last kid was born. It meant no writing (can't really read or write well!) or reading. I did manage a little bit on twitter and FB but it was hard. If I hadn't been so bored, probably would not have managed even that much.

So today, I did two days of photo a day April. The tasks were something orange and something you drew. Technically, I could have used one for both, but since I have literally sketchbook-s-as in plural- I thought it would be cheating. 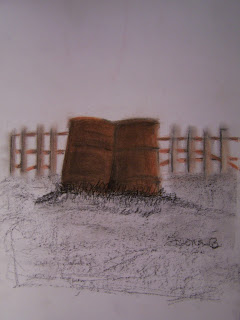 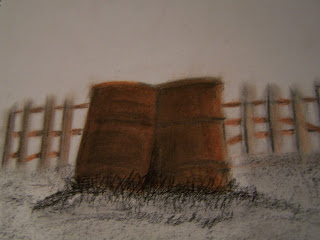 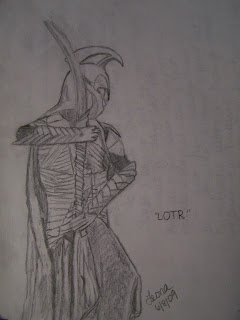 I choose to think of the barrels as "burnt orange" going back to the old crayola boxes :D And the other picture is of an elf posed to fight. The barrels I did on the 4th of July last year, and the dates on the elf lol

Hope y'all had a good few days. I'm going to go because I'm exhausted and will catch peeps up later on what all went on.
Posted by Leona at 2:29 AM