Things I don't like. This one was really hard. I don't like housework of any kind, there are ragweeds growing to beat the band that I'm deathly allergic to, I have one lone large tomato plant in the area I've planted seeds that looked...sad, when sitting there in the pot. In the ground, it looks more hopeful, and more like a mother chick encouraging it's peeps to grow. Lonliness is hard.

The neighbors dogs...definite dislike. They tore up my fertilizer bags in about 2 hours after I dropped them off yesterday. Also, in past years, they have dug up my garden. So, yeah, not on my favorite lists.

But, I think, I'm going to post the pic of my 3yo, who took his pants off, put a pillow down on his little dresser, climbed up, pulled the blanket over his head (it's used as curtain to keep weather out) and watched his daddy out the window. It was so cute. But since we had put his pants on so he could go outside, he had given up when he took them off. He thought we weren't going out with dad. But he was getting as close as he could to being where he wanted to be. 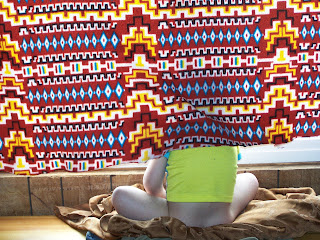 My 3yo
He's very small for his age, due in part to his Down Syndrome. But he's smart and strong. I hate disappointing him and not being able to get him to understand. He needed clothes on and to eat. He only likes wearing flannel and fleece, so spends a lot of his time naked or in pajamas. He'll wear anything we put on him to leave and play outside. But he won't keep it on to play in the house.

It wasn't long after this that we all were outside, but in the meantime, he got as close to his wish as possible.
Posted by Leona at 11:52 PM