I am sharing some guest blogs. I'm a bit behind. My brain isn't what it's used to be. Though, perhaps with my daily vitamins, I'll fix that. :D As I was sorting my emails to get as many as possible filed and round filed, I came across this. *headdesk* She's much too nice to me. I have two others that will be posted soon as well. :D
Sheri is a helpful soul whose heart is as big as the internet. I hope you'll enjoy her blog and her book!


First and foremost I want to thank the lovely Leona for letting me stop by to chat with you all! I will try to be on my best behavior… try…


Today I thought that I would talk a little about how writing is my sanity in a very otherwise insane world. This has been a pretty tough year for me personally and there are two reasons that I have survived it, my fiancé and my writing. Without either I really don’t know if I would be here to talk to you or not.


In a world where I lost my grandmother, was diagnosed with multiple sclerosis, had to leave a job due to said ms and some harassment, and money woes, well there was not much that was constant in my life this year. And while I do credit a lot of my being able to keep it all together to my wonderful fiancé William, I also know that writing helped me through this year as well.


Even when my body is failing and I can’t work in the retail or office world, well I can still write. When my emotions feel like they are going to boil over, writing is a great outlet to get them out in a safe and secure way. Writing gave me a sense of purpose in a life where I otherwise felt lost, it was my shining light in the darkness so to speak.


At the beginning of the year I had grand writing plans, 12 stories, novellas, works to be out in 2014. Well I fell short of that goal, I had 6, Lost Souls being the last to come out this year. But I still published 6 stories and kept writing during a hard time and for that I am very proud. And next year is already looking bright with one novella and a novel on the horizon and many more to come. Writing is my constant and I wouldn’t have it any other way. 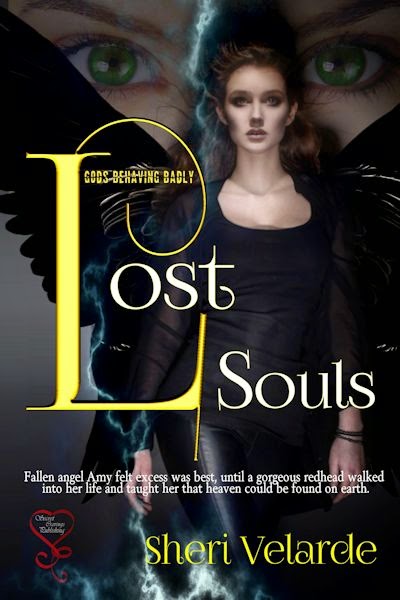 
Amy is a fallen angel living life on earth as a rock star, embracing her bad behavior and becoming a heavy metal goddess. With the excesses of her new career she almost feels happy. Almost. However something her old friend Aphrodite once promised her is still missing, love.


Jade is a sweet and sexy woman, trying to make a place for herself in this lonely world. Lost in Los Angeles and just looking for a somewhere she belongs. As the holidays approach she only realizes how alone she truly is in the unforgiving city of Lost Souls.


One night these two meet seemingly out of the blue and sparks fly. It is as if something is drawing them towards each other. Now they both are learning what true happiness can feel like, if only some secrets don’t rip them apart before their love even has a chance to bloom.


Suddenly she felt a warming sensation shooting through her body, something she had never felt before in her long life. She turned to see what had caused it, or she should say who. A beautiful woman with piercing green eyes and waist-length auburn hair stood in the doorway, casual jeans and black T-shirt hugging her body’s generous curves. She was the most alluring creature Amy had ever seen, and she was staring right at her with a look of intensity in her eyes, as if she had been searching for Amy all along and had finally found her. They stared at each other for what seemed like an eternity before the connection was broken, the pale beauty shaking her head and heading towards an empty seat on the other end of the bar and returning Amy’s senses to her.


With the spell suddenly broken, Amy once again could hear Len finishing up his story as if nothing special had just happened. What the hell was that? Was the woman at the other end of the bar some sort of demon? She had to be magical and otherworldly to cause such a reaction. She certainly had otherworldly looks. Even though her hips and breasts were more ample than most angels and the like, she had the body of a goddess that begged to be touched. Amy shook her head. Len had finished, so she ordered them another round of drinks. As soon as her martini arrived she downed it and immediately signaled for another. If only alcohol affected her like it did most humans she would probably be calming down by now and not worrying about the mystery woman. Instead she still felt strange, like something had come alive inside her for the first time. She risked a glance at the red-headed siren down the way. The subtle temptress was sipping a beer, chatting with a bartender on that side of the bar. Suddenly she laughed and her whole face lit up, causing Amy to at once be jealous of the bartender and to want to be next to this woman and be the one making her laugh.


She must have been staring, for Len interrupted her inner turmoil. “She’s a looker, all right. A woman with curves too, not one of those too-skinny Hollywood types. They’re a rarity out here nowadays. If I were younger I might try to fight you for her.” He laughed. “Of course, if she picks you I would be out of the running anyways; you know, that pesky penis and all.”


It was Amy’s turn to laugh. “You know some women like both men and women.”


Len winked knowingly at her. “So I have been told. But I’ve never taken you to be the sharing sort of gal. Now get over there and let one of us live the fantasy tonight. After all, we are rock stars, go act like one!”


Thank you, Sheri. What a tantalizing piece. :D Go get your copy today! I appreciate you all who are still following my wonky blog. I have loads of news and will share it as the days go by! Sheri has overcome loads of personal adversity and keeps going. I'd love for some comment love for her.