LOL yeah, I know. I started to blog but didn't finish it. Got distracted with editing. My "real" job lol

I Haven't written anything on midnight moon, but I have on the other short. I'm so excited. It's nearly halfway done. I also finished my first round paper edits on the short for the Ravaged anthology. I have to input them on the computer as well as watch for things I made note of at the end. But it's a huge deal I focused long enough for them yesterday!

So, the picture was something you found.... How many of you know of my curse/blessing relationship with caffeine? *battens down the hatches as a hurricane develops from flurry of arms going up* Well, it's in scarce commodity here these days, and will be for another two weeks. So I took a picture of my pop cop. At 7:30 pm Friday the 13th, I found my caffeine!!!!!!! 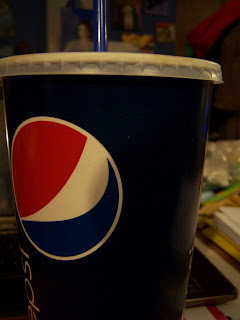 On April 13th last year, my daughter nearly died. (part of the whole #effoffApril) This year, she was evacuated from her apartment early in the am. Perhaps she should find herself a bubble and sleep through April the 13th from now on! Thought of telling her that, but don't want to add to her list of paranoid things. If the 25th comes around and something happens to my family, I may be putting my whole damn family, including the exte

Beautiful sunny day here. Will have to go outside for a bit. I want to garden, but I have rocks to get today and tomorrow and my back is already protesting. My carpool tunnel and tendinitis are also speaking up. Loudly. I can't find my wrist thingies either. :S Could be an issue. Sigh.

I am determined to get all the rocks this weekend and finish the short I'm hoping to have included in a special line (keep your fingers crossed. It's not paranormal so I'm struggling with the flavor if you know what I mean) before I go to bed Sunday night! And if I can, get my garden area plowed under.

Big plans, I know. Will require a bit of discipline on my part and a whole lot of luck on the universes, but I'll aim for it and see what get's finished.
Posted by Leona at 12:39 PM