Well, yesterday was supposed to be younger you and today I missed the even little bits of one. So, I'll give you one of a younger me...okay, two LOL these are not my pics, but ones taken of me my senior year.

I'm the girl with the cheeky grin on her face and curly hair. The guy giving bunny ears to one of my fav teachers, was also one of my fav boys at the time, James Martin. He was boy cheerleader. He's now a chef. My parents were sure he must be gay... LOL (he wasn't and isn't) I had the biggest crush on him. I must have known even then he'd turn out to be a damn good chef. He made some delicious pastry thingies (if he reads this he's probably going to roll his eyes that I don't know the names! lol) cuz it seems most of the guys I dated seriously were either good cooks/chefs or firemen or both...apparently I like things hot in and out of the kitchen!!  Anyways, my smile was all for him that day! He was also in my french class...how convenient... :D:D (I was a little outspoken then as well...)

By graduation, I'd all but forgot about ol' what's his name lol (jk James, you're a terrific guy...well, for a boy cheerleader ;p) Was I ever glad to graduate. I loved school but my senior year was a rough one! Even if I was voted teacher's pet after not having been in public school for three years... 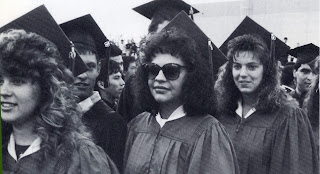 I'm the one about to walk out of the picture in this one. Seventeen years old and feeling like forty. If only I'd known how I'd feel by the time I was nearly forty... would you look at those dos! Who can guess what year I graduated?

On a side note, I was able to get my thyroid meds today, so focus should slowly come back for me over next few days/week. Watch out!! My house, my writing, and my art are going to squeak in fear of my wrath and my rag! LOL I'm at 16,900 ish on Midwife's Moon (not sure where I was last night, with more time ahead. I didn't get much done last night. I went to bed hoping to get up early with fresh eyes. Well, instead, I laid awake all night. Sigh. One my other short, which I think I'll call Hickory, Rick, and the Doc, I also wrote a bit on and am at 3200. (yes, it's an Erotica).

I also picked up first round of edits from the shifter anthology, my story being Barely There. Good things I got my meds!!! Tomorrow, is probably going to be spent doing more cleaning than anything because I need my space back! I was nearly finished with main living areas (still need to do bedrooms) when all the boys got sick and I crashed. It took the last of my energy. I started cleaning again and painting. It was awesome. But I'm having trouble focusing on cleaning. Since I'd started spring cleaning, I'm not just in a do chore spot. I have to THINK and organize. Especially if doc's right about Edward being High Functioning Autistic because it'll need to stay as much the same as possible...