Hi!! I have a lovely guest today for my writing day. Well, I've been good at putting up loads of writers...more so lately LOL Enjoy this well done blog!

My name is Remmy Duchene, I write interracial, GAY romance and erotica and I have a confession to make.

n unhealthy obsession with everything samurai, but not just any samurai--I love the masterless samurai, the Ronin. My love of the culture and the warrior stemmed from a research paper I did in university on who is arguable the best samurai to ever live, Miyamoto Musashi.


Most of us know him as the writer of the book of five rings but this man was bad-ass. He wasn't your typical samurai.  What do I mean by that? Well back then a samurai was not only bad-ass but he was kind of the Justin Beiber of the time. They were loyal, wickedly skilled, well groomed and well, everyone wanted to sleep with them. They were hip, cool, in, revered.  Musashi on the other hand was unkempt, unknown for a long while, scraggly, found with whatever weapon he could get his hands on and had no respect for timing when it came to duels.  You see, he fount is first duel was at sixteen years old. And after a few shots from him to his opponent, who might I add was older and very well known as a very well skilled samurai - Musashi picked up his opponent, flung him to the dirt and beat him to death.


Another noteworthy duel came when he was fighting another well known samurai. He showed up to the duel about two hours late, then instead of bringing a sword like a regular samurai, Musashi showed up with apiece of wood that was made from an extra oar on the boat that brought him to the duel. You see, showing up to a duel late was considered highly disrespectful. It  made his opponent crazy that Musashi would DARE show up so late and without a sword.


But you see, that was precisely what Musashi wanted. He wanted to get into this samurai's head--psyche him out, throw him off his guard. Musashi was not only great at fighting, but he was a master when it came to psychological warfare.


Ever since I learned about this one man and a few others, my love of all things samurai was born. My newest release is about a Samurai who died during the Onin war that started in Japan in 1467 and lasted to around 1477. He then inherited the powers of the SHIVERS and now must fight with evil to save the planet and the man he loves. Yes, back in the day there is history that claimed Samurai engaged in homosexuality.  One source I read said it wasn't a question of why a samurai would do this--it would be a question of why not.


Osaki joined forces with the Shivers, a species created when Zeus cheated on Hera yet again. Hera, in her fury cursed any offsprings that comes from that union and when Ciro, Aerios and Koi along with their brothers were born, they came out with the ability to control the weather - you see, their mother is the Goddess of the Storm Winds and Zeus--well he has his lightning bolts.


There are few Shivers that are good, like Koi and Ciro. But most of the others are out of hand, they just want to see the world burn.


Osaki has a lot on his plate and love is the last thing he has time for. Not only does he have to get used to his new powers as a Shiver and all the training it involves, but he also finds himself being drawn to a human—though Kofi makes it clear he’s into women—and Osaki must respect the man’s wishes. All Osaki really has to do is focus on training and being the best tour guide possible for Kofi. But nothing ever goes as planned and soon rogue Shivers are popping out of the woodwork, hell-bent on destroying Osaki for his inheritance. It soon becomes quite clear that they want him dead, and they’re not afraid to use Kofi as leverage—or as collateral damage.


Kofi Olabasu needs a vacation. He’s spent so much time looking out for his brother and working that he’s completely neglected himself. To make matters worse, feelings for a man are driving him crazy. The moment Kofi feels Osaki, he knows something is about to change. Confused about his attraction to Osaki, he agrees to take a vacation and accepts Osaki’s offer of being Kofi’s tour guide in Japan. However, nothing is as it seems. Soon every dark corner is filled with danger and those who wish to do him harm. 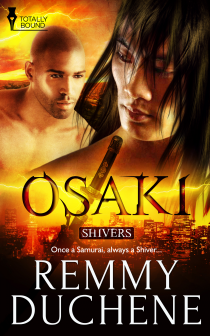 
With the faint sounds of laughter floating up from the others below him, he put on his apron and grabbed the brushes. He stared at the blank canvas for a moment before setting up then began with red paint. He worked until the canvas was completely covered. It was as if he couldn’t stop. Kofi sat back and smiled. He was caught up with his work but not enough to miss that familiar feeling he always felt when Osaki was near.


“Are you just going to stand there and stare?” Kofi asked without turning around. “Or are you going to say something?”


“I did not think you knew I was here,” Osaki replied. “I was careful not to make a sound.”


“I didn’t hear you,” Kofi said, placing his brush down then turning on his stool.


Osaki was dressed in a blue samurai kimono.


“I felt you. Is everything okay downstairs?”


“Everything is fine. You left a dinner you planned. I may not be human any longer but that, I do not believe, is something that is done. Am I correct?”


Osaki chuckled. “For a minute there, I thought you would say something like ‘I smelled you’.”


“Nothing like that. Why aren’t you with the others? It sounds like a real party out there now.”


“I just wanted to check on you.” Osaki walked into the room to peer closely at the fresh painting. “You did not look so well when you left us. I was merely curious.”


Kofi smiled. “Thanks… For checking on me, that is.” He turned to stare at the painting with Osaki and for a moment, neither of them spoke. “Do you have a last name?” Kofi questioned. For some reason Osaki mattered to him.


“The English way, yes. In my country, my name is Hirosuke Osaki.”


“Well, look at that. I learned something new.”


Osaki laughed. “This is beautiful. What is it?”


“I don’t know. It’s what I’m feeling inside. Do you really think it’s beautiful? I mean, do you really like it?”


Kofi’s cheeks heated when Osaki turned to look at him. He took a breath and undid the apron he wore, but he pulled the wrong string and it knotted around his neck. He frowned. “This is ridiculous. I can’t even untie a stupid string now?”


“You are feeling chaos, Kofi, confusion. I think perhaps you do need that vacation. Here… Let me help you with that.”


Osaki stepped behind Kofi and tugged at the strings. His fingers brushed Kofi’s skin, sending a streak of electricity down his body. Biting his lips, Kofi held back a moan, wondering why this man’s touch caused such a storm inside him. He said nothing, nor did he try moving away. Kofi was curious, silently burning with each inadvertent stroke of his neck by the samurai.


“I don’t know anything about you,” Kofi said, happy that his voice didn’t crack. “Are you a real samurai?'


Thanks for stopping by and check me out! Thanks for having me!


Start your SHIVERS obsession today with book 1 in the series - CIRO! And Grab OSAKI on April 17 at Totally Bound!