So you may be asking why I am having a cover re-reveal or what is a re-reveal anyways? Well you see, life sometimes gets in the way of the best laid plans and changes sometimes have to be made. When I had my first cover reveal back on February 1 (I know because it was my birthday) Quest for Redemption seemed to be on the fast track to coming out, but then life happened.


I can't remember which happened first, but both my editor and I got sick. Like not a cold or flu sick, but majorly sick. I had a major flare in my multiple sclerosis which left me pretty much useless until it began to subside. School, which I was taking just for fun, began to demand more and more of my time. This caused a delay in edits, hence the delay in Quest coming out. Things happen and I can't say that I am truly shocked the Quest for Redemption hit a few bumps on its way to publication. You see, this book has been nothing but bumps and a test in perseverance.


Quest for Redemption has been a mountain for me to climb, over three years in the making and I have finally reached the summit, publication is in sight. This started off as a novel written during National Write a Novel Month, so needless to say the first draft was a hot mess. It got tabled for a while, then I picked it back up and cleaned it up added things here and there, turned it into something readable. Finally I submitted it, it got accepted. During the time of pre-edits the story began to change again, becoming more fantasy than romance, the characters deepened and solidified. It was hard work this novel, my longest work to date and also my toughest to get through.


Blood, sweat, and many tears went into this work and soon it will be out in the world! This is by far one of my biggest accomplishments as an author. My first full length novel, my first fantasy piece, my first book with my new publisher. Quest for Redemption represents over three years of hard work, sure it took me a little longer to get here bear the release date, but I got here and for that I am grateful. 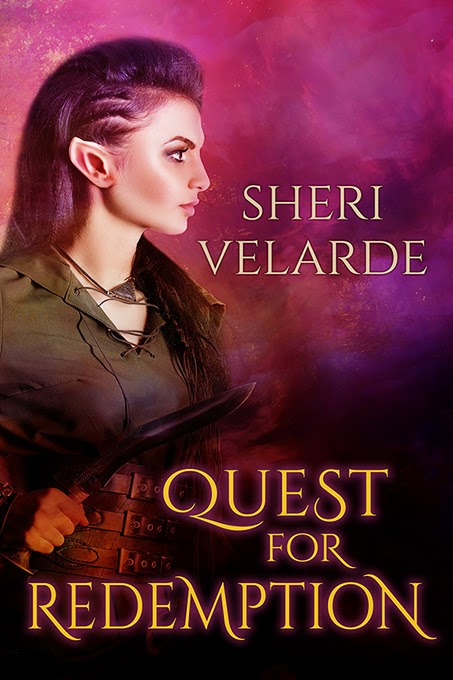 
Quest for Redemption will be out on Three Worlds Press April 23, 2015!


Zanna stood, stunned into immobility. While with Alana, she would have to travel the human way. The thought slightly annoyed her, yet fascinated her at the same time. "I do not travel by vehicle, so I will be forced to ride in yours." She could still smell and see the fear in Alana, so she tried to lighten the mood. "You know I have never actually ridden in a car before."


"I have never had the need. I simply come and go in this world when I want. I usually arrive and leave the very spot I wish, and there is never a need for me to travel from place to place while in this realm. Not to mention I find the transportation of humans to be quite slow and cumbersome." Nonetheless, Zanna elegantly bent her long frame into the passenger side, slightly curious to see why many humans loved their cars so much. Sitting inside one, she felt rather cramped and uncomfortable, and while it was a fast means of transportation for a human, she didn't understand what was so special. Maybe one had to be human to fathom why vehicles fascinated them so.


Alana very nervously started her car and began to pull out. "Aren't you going to put your seatbelt on? We don't want to get pulled over."


"Excuse me?" Zanna had no idea what the sprite spoke of.


"The human law enforcement requires all people within a vehicle to wear a seatbelt." She pointed to the belt around herself.


As she pulled the belt and fastened it like Alana's, Zanna asked, "What is it for?"


"Protection in case of an accident. Stops you from flying through the windshield," she explained.


"How curious. You know it is completely unnecessary for me. But if it will keep human law enforcement from interfering, so be it. The less I have to deal with humans, the better."


The drive to Alana's home did not take as long as Zanna expected, especially considering she was used to arriving in places almost instantaneously. She actually found the trip rather interesting, seeing the human world in a way she had never experienced before. The tall metal buildings and the harsh exteriors held a beauty to them in their angles and order that she had never realized before. While she could never give up the open airiness of the magical realm, viewing this realm as a human gave her some insight into humans and their nature. Alana pulled into the parking lot of a very tall and nice-looking apartment building. She turned off her car and Zanna could see that she was once again trembling.


"What are you going to do to me and my mother?" She spoke so quietly that a mere human would have had a hard time hearing her.


"I am going to gather information. The more I hear about how little you know, the less inclined I am to punish you. I would like to know why you and your mother, who have magical blood, cannot enter our world. It is your birthright. If you cannot enter our world and have not been allowed those privileges of being two-natured, then I cannot punish you for not following our laws." Zanna tried to smile and reassure Alana that she meant her no harm. Judging by the look on her face, it worked. Zanna had been told before that when she smiled at humans and stared directly into their eyes they believed whatever she said. It came in handy when questioning them before erasing their memories.


Alana took a deep breath and stepped out of the car. Zanna attempted to follow, but forgot to take off the seatbelt and found herself still restrained. To her surprise, Alana giggled, and after a moment, so did Zanna. That shocked her even more. She rarely laughed, let alone giggled like a young girl. Kalan had been right saying that something was up with her tonight; she definitely was not herself.


As Alana took the lead, she said, "My mom's going to freak out that an elf is coming to our home. She always talks about how strong, powerful, and beautiful elves are. She's going to be so pleased, but mad that I didn't call to warn her that you were coming."


"I told you I mean no harm to your mother. There is no need to warn her."


"No, you misunderstand. She's going to wish she had time to clean and dress nicely for you. To make our home and herself more presentable to you," Alana explained.


Zanna was about to answer that this would not be necessary, but they had just walked inside the apartment building and a young man in the lobby, apparently leaving, walked right toward them. Alana and Zanna both stopped talking, not wanting to be overheard. Zanna also noticed that Alana's posture stiffened, and she could smell a little fear coming off her once more. She could tell that, this time, she was not the one causing the reaction. Zanna glanced and saw that Alana was blushing and peering shyly at the young man coming their way.
Posted by Leona at 12:30 AM