Cover Reveal for Between Love and War: Book 3 of Gods Behaving Badly


When I first thought about becoming and “author” and putting my work out there for others to read, I never thought that I would become published. Then I never thought that I would have a series! How cool is that? I have a book series! It still boggles my mind even though Book 3 of my Gods Behaving Badly series, Between Love and War, is about to come out next month. Truthfully I stumbled into a series. The first book, Looted, was meant to be a short that just kept growing and ended in a way that demanded another story. I guess I should also mention that Looted was rejected before it found its home at Secret Cravings Publishing. Just goes to show that you should never give up. So Stealing Hearts came to be and I introduced a few more gods of old, gods who were just demanding to have their adventures told. Sometimes characters just take on a mind of their own and will not leave you any peace until you listen to them and write about them. The one that screamed at me the loudest was Ares, the god of war just would not be put off. So Book 3 is the story of the true love between Ares and Mania, because of course the goddess of madness is the one true love of Ares. Only makes sense right? Truly, character and books do take on a life of their own and often I am just along for the ride!


Between Love and War was just accepted last week and is being fast tracked for a June release! I will have a release date soon, but right now I am so happy to be able to share the beautiful cover with you all! First round edits are done and we are full steam ahead! I am so excited! 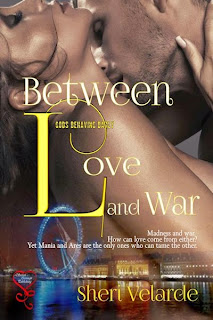 
After the Fall, Ares spent a thousand years searching for his lost love Mania. Thinking he had lost her forever, he settled into the life of a mercenary here on earth. Then the fates, and his sister the goddess of love, showed him Mania was alive and well. He travels to London hoping to regain what he had thought lost forever.


Mania had spent a millennia as a wraith of madness before slowly starting to rebuild herself into a new and independent woman. Art had been her outlet and her savior. Then one night her world is turned upside down when her old love walks back into her life. Can she love him again and still remain the woman that she had become?


Unbeknownst to both of them a mysterious organization is lurking in the background and threatening to unravel the lives of all the gods on earth.