I'm a lover of zombies. I got into The Walking Dead before I ever saw the show. My friends were all fans, and I loved what I heard. Plus, Norman Reedus, Michael Rooker? Nuf said. I wrote a long ass zombie action story. I had to redo it. Ever try to change something from first person present tense, to first person past tense? Yeah. No fun. Took me hours and hours and the help of quite a few friends. I'm not stupid by any means, but I couldn't see the forest for the trees, if you know what I mean.

Then, when I finally got finished with that, I had become published under the paranormal romance genre (Yay! The Ulfric's Mate, the start of a destiny I never imagined!). I submitted it to my friend's brand new publishing house, Just Ink. She said to rewrite it. Well, life happened. I had contracts already for three stories (Rick Sexed Up the Doc, The Captain's Christmas, and a short in an anthology, as well working on The Ulfric's Mate, and my short in Ravaged Vol 1, which had just released.) or I don't know what would have happened. I already have spoken of the highlights (or lowlights :P) here, but of course, those are just the tip of the iceberg.

Finally, finally, I finished my long zombie urban sci-fi action book rewrite. I sent it off and yay! Acceptance. *dances*


I finally got to watch The Walking Dead (loved it like I knew I would! :D), still love all my zombie friends, and now have two books out with zombies!!!! The 88k one, which is titled, Mayhem in Mexico: Zombie Infestation, is going on sale for President's Day!! You want action and zombies for 99 cents? Get on board!

Ready for a little taste? Here's an excerpt:


I turned back to encounter the brightest blue eyes I’d ever seen in person. I smiled wide, startling the other woman. Infected. Definitely Infected. The eyes of those with the Ultimate form of the Zombie Virus became luminescent. Not innocent and collaborating in the torture of an FBI agent. If I had to shoot her, it wouldn’t be collateral damage. Now the only person I had to worry about accidentally killing was Agent Connelly. I liked things easy. In. Kill. Out.


I looked down and scuffed a foot against the stained concrete. Nonchalantly the toe of my boot landed on the door jam. It brought me closer to the woman. “His name is Joseph.” Head lowered shyly so it appeared I stared at my feet, I watched the woman through my eyelashes. I was tempted to shoot this gorgeous zombie in the gut. However, I needed to get more information before killing off the players, no matter how tempting I found it.


I smiled back. “What’s your name and why are you here?”


“I’m Andrea. You could say I work with Joseph.”


I could say a lot of things. That didn’t make it true. “Oh really?” I replied with a touch of feigned interest mixed with anger. “What kind of work requires a hotel room,” I added, a little—okay, a lot—facetiously. I stepped inside, working it so my back stayed by the doorjamb, hiding my Magnum.


Once my eyes adjusted from the glaring sunlight to the dim hotel light, I didn’t have to pretend shock. Joseph sat tied to a chair, his eyes swollen nearly shut, his hands tied behind his back.


“Joseph! You’re hurt, darling.” I kept up the sweet act with a tinge of anger. “Why don’t you take a shower? It’ll help immensely.”


A quick smile flashed across his dimpled face—which had to hurt—white teeth shining against his tanned skin. “As soon as our guests leave, darling. I don’t want to be rude.”


I turned to assess the other three in the room more closely, my back facing the wall as I made sure my ass kept the gun out of eyesight, . Two men and the woman. The men looked military. Crew cuts, at-ease stance, weapons at their sides holstered. Interesting. Unless I was mistaken, and it rarely happens, they were clean. No exposure, no immunity. Straight humans.


I almost felt sorry for them. Until I looked back at Joseph’s face. “I’m sorry.”


I adjusted my stance so Andrea stayed in direct eye contact with me. “My boyfriend needs a shower and medical attention. I don’t mean to be rude.” My voice dripped with sarcasm. “But can you do this work you never elaborated about later?” Whatever this thing was they were up to, I doubted they’d take me up on my offer. I mentally shrugged.


Andrea gave me an unpleasant smile. Her eyes were flat. “We don’t mind if he cleans up. However, we must get what we came for first. Such a long trip to make for nothing.”


“We’d hate to have you go away with nothing to show for it.” I jerked my .357 up and shot Andrea in the knee. The barrel of my gun shifted to the men. I stepped to the side, closer to them.


I had to hand it to them. Their weapons were out, but they waited. For what, I couldn’t be sure. Andrea shrieked once, yet motioned her men back.


“Our pussy cat has claws,” she said to Connelly before turning back to me. “You hit me in the knee on purpose?”


“Yes,” I said without an iota of inflection in my voice.


“Really? I’m a writer. I believe you asked for me?” I added, making a guess.


The shock on Andrea’s face almost made the extra stress worth it. Almost. 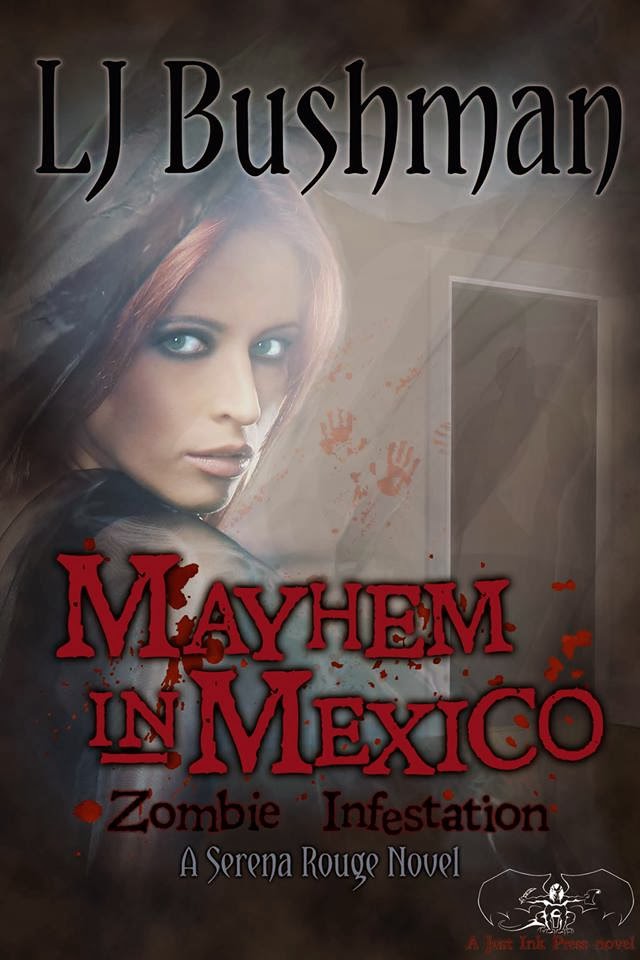 Getting kidnapped by the FBI is pretty low on my list of things I want to do. It’s right up there with meeting terrorist groups and writing their side of the story. Why a successful novelist like me? Turns out I’m a scapegoat for someone with some serious health issues—they’ve contracted the zombie virus.
I’m a zombie killer, killing them as quickly as I can. But I’m only one woman. You’d think being an Immune was great, but no. Ever since the government purposely tried to infect me with the zombie virus, they watch me closely to see if I turn. Not happening.
The FBI wants me to accomplish something big two thousand miles from home. When I arrive in El Paso, Texas after my strenuous drive from Washington, my contact agent, Joseph Connelly, isn’t available. Being tortured by a zombie for two days is an excuse I can accept after saving his ass. These aren’t your Hollywood zombies; not right away. They never get sick, their IQ triples, and their sex appeal? Off the charts. Until they die and resurrect as true horror flick zombies, with brains. Trouble is, some of them have developed a taste for meat—human meat—before they die.
Problem with governments screwing around with our DNA is things never go as planned. When terrorists kidnap my kids, all bets are off, and Agent Connelly agrees. If we don’t save my kids and steal the antivirus without getting killed, the whole world is going to have a really bad day.


Also, something I should probably add to my official bio, I write under LJ for my action/non romance books. Though there is a bit of "romance" here, there is no sex (sorry to my romance fans! lol).