This week is a busy week for my blog :) I'm starting to get caught up with things. To start the week out, let's see what's on the agenda. Oh yes, a lovely woman, very near and dear to me as we've gotten to know each other as fellow authors for Breathless Press and Lycaon Press :)

I'd like everyone to say hi to Jo :D She's a prolific writer and a lot of fun. You may bring gifts but food needs to be GF :D Also, if I've done it right (keeps fingers and toes and eyes crossed) you can click on the book covers for link to buy :D Even the one that's not out yet should have a link. Pre-order it! You won't regret it.

Feel free to comment or ask questions. My dear J. Lilley isn't in these United States, so there is a time difference, but I'm sure she'll be happy to answer your questions and accept any gifts you might want to hand out. Without further ado, please welcom my guest today.

Thanks for inviting me over Leona.


Hi all. My name is J. Lilley.  I answer to Jo. I'm a Young Adult author. Actually, that's not strictly true. I don't see why a book aimed at teens can't be read by someone older. In fact my tag line says for teens and beyond, and I have a good few older readers. Some who are asking when the next book in the Shalean Moon Series will be available.


My idea is a good book is just that, a good book, a great story, which anyone can read. Yes you need a minimum age, but a maximum ? Why?  Surely if you like the premise, you read. Simple as that.


I think, (and I hope my readers do as well) that The Shalean Moon books are good. That the story enthralls and you want more. You turn the pages faster and faster and sigh with both satisfaction and frustration at the end. And count the days until the next one is released.


So far the first three books in the series have been released. Both under one amazing print cover, entitled Beginnings, and individually as eBooks. Discovered Resolved and Accepted. 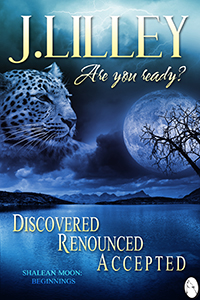 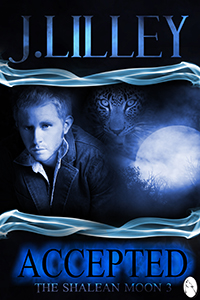 The second set of three books will be released similarly. One a month as eBooks; United (September 7th) Threatened (October 5th) Resolved (November 2nd) and then as a trilogy in print entitled Resolutions.


These are all available from


Here's the blub for the books


Discovered — When Rach moved to Scotland, she knew there would be changes. She just hadn't expected them to be quite so dramatic. Not only was there a new house, new school and new friends, but there were new secrets to discover. Brios Parde was a Patriarch in waiting. When the powerful leopard shifter senses a new Shalean he is amazed to discover it's the new girl. All his senses tell him Rach will be important to him. However, the Rogues try and destroy the budding relationship. Will Rach decide to side with Brios or help stage an uprising?


Renounced — For Leira, all she knew was Shalea. Shalea and Donny. Now she wanted to see life without their protection, to live without the skills passed down to her. Without her heritage. However, there were others who wanted her, didn't have goodness within them, and would stop at nothing to take her; to turn her towards them. Could she survive and repel their evil without the protection of those who loved her, or would evil prevail? Only Leira could decide...


Accepted — Andy is Shalean and in love with a human, but he had no idea how to make such a relationship work. Sam has no idea that Shalea exists, only that he is fed up waiting for Andy to make the first move. Overjoyed to find his feelings reciprocated, Sam starts seeing strange things. Something is afoot, and Andy seems right in the middle of it. What Sam discovers rocks him to the core. But he is determined to fight for their chance of happiness. Human he may be, but as long as Andy wants him, they can face anything...can't they?


I'm happy to offer an ecopy of the book of their choice to one commenter within a week.


And to get whet your appetite, here's an excerpt from the next book, 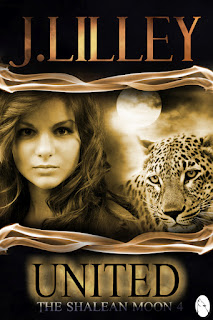 There was a shot, and she dropped the earrings on the floor. Ali spun round as her body jerked, and she sank to her knees, her breath coming in short, sharp bursts. Her vision blurred, the pain was intense, threatening to take over to the exclusion of every- thing else.


She concentrated on letting the pain flow through her; not filling her but passing. Hot, hard, fiery and—if she let it—all-consuming; she had to accept it, absorb it, dilute it and let it go.


Not near her, not for her, but she knew. Not who it was, but that someone important was injured. As she worked with her gifts, she felt the pain fill the room, fill her and move on. Ali’s gifts were wide, she was lucky; but her true gift was one of healing. Was that why she knew that something bad had happened?


Because her skills might be needed? She let her body ride through the last remnants of pain, feeling the power, the hatred, and then the satisfaction someone was getting from the act. Gradually, her breathing slowed and the haze in front of her eyes cleared. The sharp pain in her side was now a dull ache.


Her mobile rang. She knew before she answered that it was Troy.


“Babe? You okay?” he asked. She could hear the anxiety in his voice.


“Yeah, I am. You?” Ali rushed to assure him, and to ask the question uppermost in her mind. “What’s happening? I heard a shot. More than that, I felt it.”


“No, no, I’m fine,” she assured him in the hope it was true. She hadn’t checked her side yet. “Listen. I felt the pain of it in me, as a message I think, but I’ve no idea what that is. I’m fine, it’s left me now. The thing is, I don’t know who’s been hit, or where, just that it’s someone important.” She paused to make sure she explained everything clearly. “Well, I know it wasn’t Dad, it didn’t feel of my blood. But it is someone close to me. Are Leira and Rach okay?” Her heart was thumping so hard she almost missed his reassuring reply.


“Yeah, no probs here. I’d just left them, the minute I felt the shot in my mind, I came back in to see what had happened. Leira’s mum is here as well. But we can’t get hold of Brios or anyone.”


There was silence. Why was he there so long? Ali felt jealous. He’d dropped her off and spent time with Rach and Leira? Just because I had to be home, by a certain time, and only just made it. Gah, grow up already!


“Look—” she began, as Troy spoke again. “Ali, we need you and your skills. Can you come?” She let out the breath she hadn’t realized she was holding. “I was just about to ask if there was anything could do. I’ll explain to Mum, if you can come and get me.”


“Ten minutes.” She heard the relief in his voice.


“Take care.” She was talking to a silent phone; he’d already hung up.


Sometimes it was handy having a mum who was a witch. This was one of those times. Her mum, Ali thought, as she put on her jacket, was something else. She’d listened, smiled, and then kissed Ali on both cheeks.


“Grannie Jeannie will take care of you and guide you, love,” she’d said and pressed a small object into Ali’s hand, before clos- ing Ali’s fingers over it. “Take her token and wear it. I was told to pass it to you when it was time. I think that’s now, don’t you?”


Grannie’s token? Oh shoot, that is too much. I’m not ready for it. It means responsibilities, an increase of power, and being an adult.


And if you'd like to pop over to my web and blog, I'd love to see you there